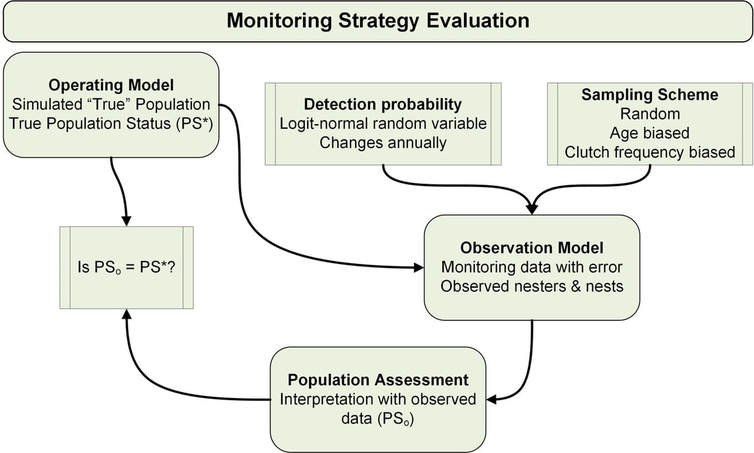 Population monitoring must be accurate and reliable for biologists and conservation managers to correctly classify populations as endangered or in recovery. In addition, monitoring data is an important indicator of whether management actions are effective, but the data must be reliable. Green sea turtles, Chelonia mydas, have endangered and threatened populations globally, but several populations show signs of population recovery. Nesting female green turtles in Hawaii have increased since 1973, but wide fluctuations in nesting females make recovery diagnosis difficult. Using sea turtle nesting beach surveys as a population index for assessment is problematic, yet often pragmatic because this is the only population index that is easily accessible. An advantageous modelling approach would be one that estimates inter-annual variability in life history traits, accounts for uncertainty from individual-level variability, and allows for population dynamics to emerge from individual behaviors. To this end, I analyzed a long-term data set of marked green sea turtles to determine the degree of temporal variability in key life history traits. From this analysis, I built the Green Sea Turtle Agent-Based Model (GSTABM) to form the basis of an assessment tool – Monitoring Strategy Evaluation. Altogether, my research suggests certain life history traits of green sea turtles have important temporal variation that should be accounted for in population models and may be useful indicators of population-level change. Importantly, basing population assessments from nesting beach data alone is likely to result in incorrect or biased estimates of status indicators. The quantitative tools I developed can be applied to other sea turtle populations and will improve monitoring, and result in better estimates of current population trends that enhance conservation planning for all species of sea turtles. This research was supported by a NOAA – Sea Grant Population Dynamics Fellowship ($115,500). Future work will include extending the GSTABM to include a spatial dimension, and to ascertaining which demographic indicators are the most valuable for population assessment accuracy. I will also expand the MoSE tool to be easily adaptable to other marine species, particularly those species where monitoring is limited or problematic. I would like to expand this research towards developing a field based program to better understand key life history traits of green sea turtles in the Gulf of Mexico, especially considering the impacts to sea turtles during the Deepwater Horizon Oil spill, and subsequent impacts to demography. I am also interested in developing a research program to study if Northwest Atlantic green sea turtle vital rates vary spatially. This project may require new study sites, mark-recapture or satellite telemetry techniques, or it may be possible to synthesize data from a network of existing sea turtle monitoring programs. If vital rates do vary over time and within populations, then this study would have a high potential of increasing population assessment accuracy.