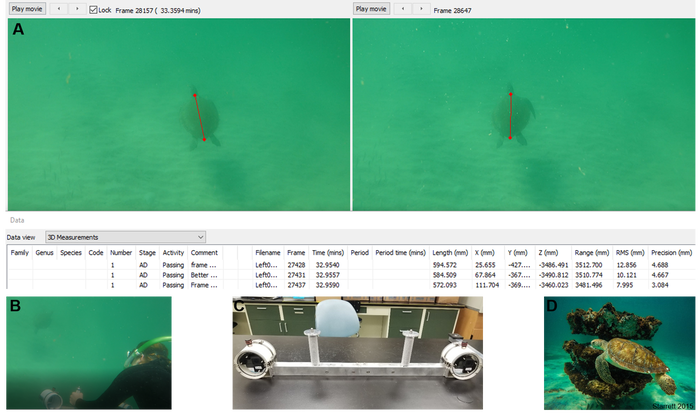 Sea turtles are difficult to observe underwater and have very low encounter rates. As such, sea turtle biologists often rely on nesting beach surveys as an index of abundance and to estimate population trends. This approach leaves out many demographic groups, including juveniles. If biologists were able to reliably and consistently measure juvenile sea turtles, then we would improve the accuracy of assessments of population status and trends. With length-based indices, biologists could use a variety of length-based statistical methods to estimate changes in population size and predict changes to the adult populations, just as fisheries scientists do for fish stocks. A recent National Research Council review of sea turtle assessment procedures recommended that researchers should give high priority to generating estimates of survival of immature sea turtles, among other key demographic rates. Stereo-video cameras are one technology that may be a useful tool in this effort. Stereo-video length measurements are more accurate than visual estimates and do not require researchers to handle wild animals, which lowers potential behavioral biases and health impacts to the animal [6,7]. I am in the process of setting up a field sampling program to use stereo-video cameras (www.seagis.com.au) to film sea turtles in key field sites in the northern Gulf of Mexico. The SeaGIS stereo-video cameras comes with EventMeasure software, which allows for measurement of animal lengths. In addition, I plan to collaborate with computer scientists at UWF to build software that uses image recognition to identify individual turtles so that we can avoid double counting individuals, and to potentially measure growth for individuals repeatedly sampled over time. If it is indeed possible to measure growth rates using this method, then juvenile survival rates could be estimated, a key demographic rate that is difficult to measure accurately using traditional mark-recapture methods. Ultimately, this research effort will improve how sea turtles are monitored and assessed. This approach may also be adapted to other marine wildlife and may improve how those species are monitored and conservation status assessed as well.
Proudly powered by Weebly